The execution in front of the Grote Kerk

The execution in front of the Grote Kerk

After the Dutch S.S. Rottenführer George Herlee is assassinated in the barber shop on the Nieuwstraat on December 30 1944 (see story Murder in a barbershop), the Germans take revenge in a terrible way. Five random Dutchmen are executed in front of the Grote Kerk. 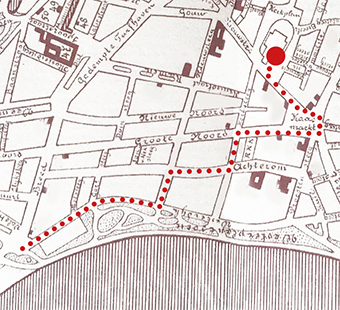 The route which the prisoners are forced along through the centre of Hoorn.

With the death of the traitor George Herlee, the danger for the Hoorn and West-Frisian resistance seems to have subsided. However, the occupier will not let this go. On January 3, 1945, the German Willy Lages, head of the Sicherheitsdienst in Amsterdam, gives the order to take five prisoners from the detention centre at the Weteringschans in Amsterdam and bring them to Hoorn. These are resistance fighters who are not from Hoorn. On January 4, 1944 these randomly chosen men are driven into Hoorn via the Westerdijk and forced to make their last march together. They have to walk straight through the town via the Westerdijk and the Rode Steen to the Grote Kerk, where they are forced to stop.

Seven-year-old neighbour Frans Zack sees them arrive, for at that moment he is playing at the corner of the church with his friend. The boys are sent away by the Germans, after which a truck full of armed soldiers drives onto the square. The five resistance members are forced to stand next to each other against the church wall, where they are subsequently mown down by the soldiers’ guns. 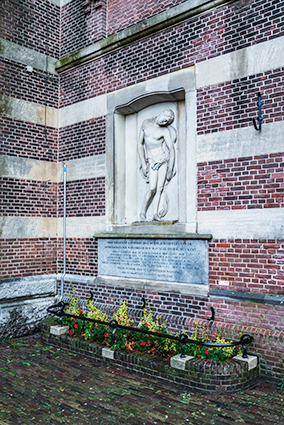 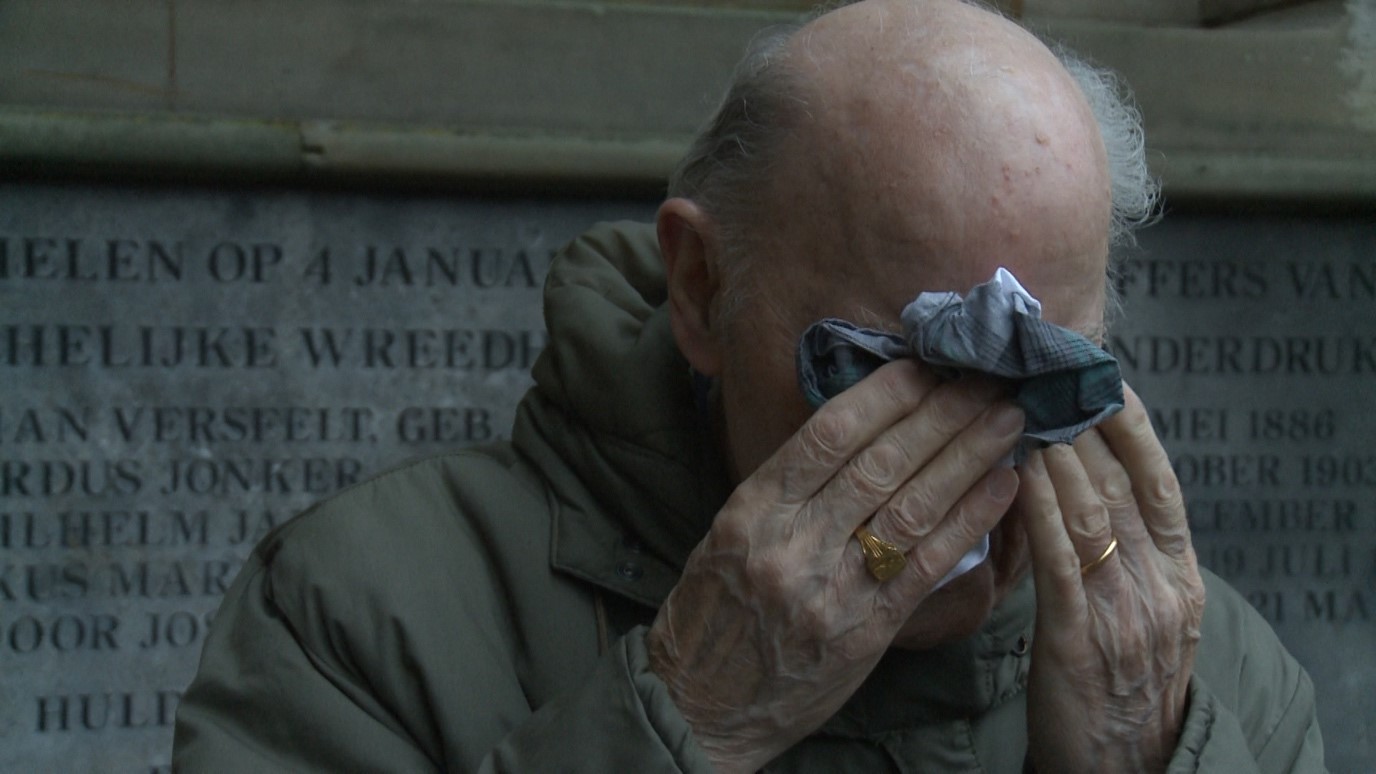 Film still from the documentary ‘My father’s war’ by Joost Schrickx.

Chris Schrickx (14 years old), who lives opposite the church, is not allowed to look by his parents, but still peeks through the curtains upstairs in his bedroom. He sees the men lying on the ground. One of them is still moving, after which he is shot again. His son Joost Schrickx will make a documentary about this later in 2017: ‘My father’s war’.

Passers-by are forced by the Germans to look at the bleeding men on the ground, even young children. The school teacher, Miss Schermer, who has just cycled up and becomes totally upset, is also forced to watch. The same day, firefighters are required to spray the blood away. The day after the execution Chris Schrickx rips a placard from the wall of the Grote Kerk. On the pamphlet that the Germans have hung there, it is stated that they set an example with this execution: the five men are said to have committed ‘cowardly acts of resistance’. It makes Chris furious.

The victims are buried in the Kennemerduinen by the occupying forces, but after the liberation the five men are reburied as heroes in the cemetery of honor in Bloemendaal. After the liberation on May 5, 1945, the Kerkplein is flooded with flowers. And two years after the war, one of the children of the executed men unveils this monument. It was created by sculptor Starreveld and depicts a falling man being riddled by the murderous bullets of a firing squad. The bullet holes are still visible in the church wall, now hidden behind the plaque with the names of the five men. 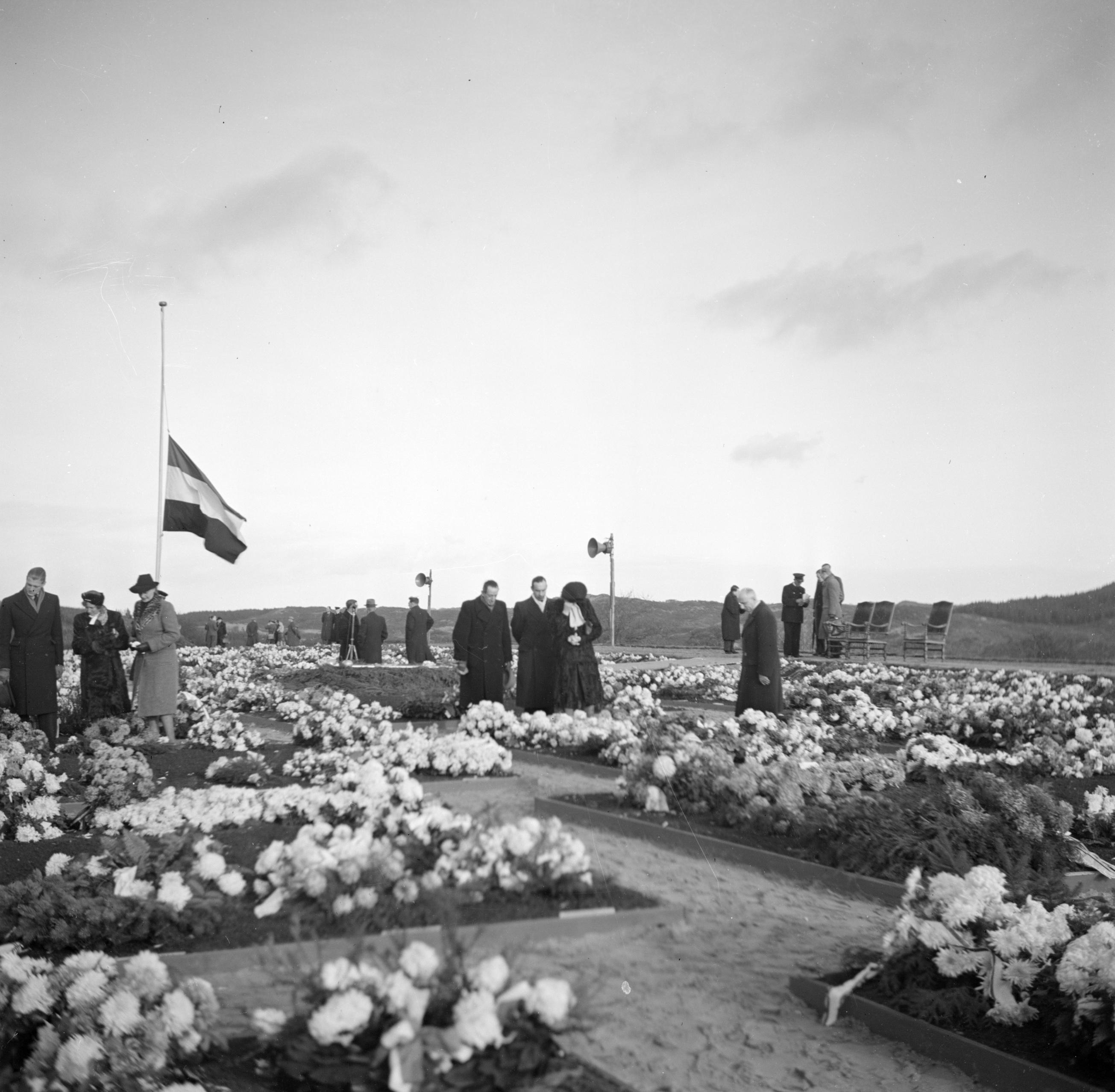 The honorary cemetery in Bloemendaal. 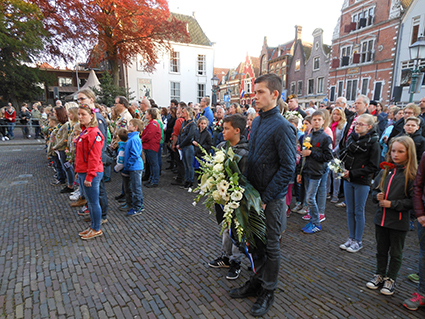 The extra long route they have to take through Hoorn means that many residents of the city see the men, a deliberate action by the Germans. It must have been a terrible final journey for them, knowing they probably won’t survive this. To commemorate them, and so many others who gave their lives for our freedom,
many people walk exactly the same route every year. Committee 40-45 Hoorn annually organizes this Silent March on May 4 at 7.30 in the evening.

There are four statues along the route: Farewell, Anger, Despair and Last Consolation. They are hands that come out of the ground, made by artist and resistance woman Truus Menger-Oversteegen. They were unveiled on May 4, 1990 by Mrs. Jonker, a daughter of one of the executed. The hands are a last salute to life, but also a cry for help: they warn against injustice and war. The Hoorn poet Margreet van Hoorn wrote a poem for each monument.

Parting:
Tears wet my cheeks
my feelings empty, my
thoughts full.
I have to say goodbye, but I
don’t know how, I’m scared, I
am tired