On Friday morning, July 7 1944, hundreds of American bombers fly to Germany.  Unfortunately, two of these aeroplanes collide. Both planes crash in and around Hoorn, along with its crew of 20. The Germans immediately open fire on them

The monument on the Westerdijk (near the Gelderse Steeg) stands in memory to the aeroplane crash in Hoorn. On Friday, July 7 1944, hundreds of American bombers fly to Germany. They are the 390th Bomb Group of the 8th US Army Air Force, which had taken off from Parham Airfield in England. The goal of the bombardment is the oil installations in Merseburg, Germany. The aeroplanes are Boeing B-17G bombers, armed with thirteen heavy machineguns, earning its nickname ‘Flying Fortress.’ During attack flights such as these, the bombers fly in close formation, which allows them to counter-attack German fighter aircrafts with as much collective firepower as possible. This is why each aeroplane has as much as ten crew members on board.

However, one of the bombers is taken off course due to the turbulence of the aircraft in front of it, which causes the aeroplane behind it to crash into its rear. This happens at approximately six kilometres above the town of Ursem. A fire starts instantly as both aircrafts, stuck to each other, crash and explode some three kilometres above Hoorn, scattering their bombs and debris in a wide area. 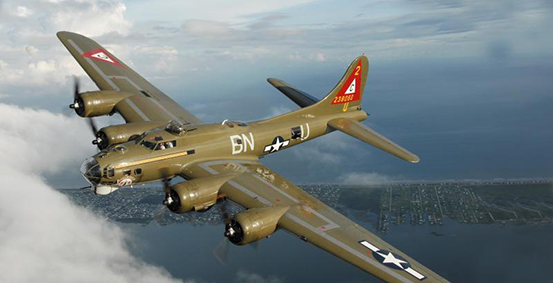 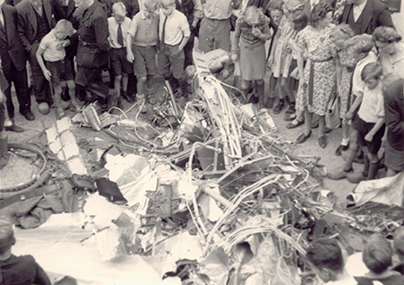 Some parts of the debris land on the Pelmolenpad, amongst which part of a cockpit in which the body of Captain Gregor is found. Bystanders survey the overall wreckage.

The crash takes place at eight ‘o clock in the morning. Every working day the Catholic youngsters of Hoorn start their day attending the special youth service in the Koepelkerk on the Grote Noord. The service has almost finished when the congregation of some 400 children are surprised by an enormous explosion, followed by the sound of falling planes. Everyone runs from the church and from their houses to watch where they fall. Debris whirls from the sky like silver paper and there is chaos on the streets. The Germans shoot at parachutists dangling in the sky.

Fortunately, the aircraft bombs are not armed yet: they do not explode. But in Hoorn there is a lot of damage. Debris is falling all over the city, punching holes in the streets and destroying houses. Four houses collapse on Drieboomlaan. Mrs. Kramer-Deen is killed in the process; at that time her husband is standing just behind the house and is hit by a beam. He is taken to the hospital. Their son Piet is at that time with neighbor Godijn where the house partially collapses, but he also survives. And thank God no plane crashes into the church, then the disaster would have been unimaginable.

Watch the film with the emotional story of Piet Kramer here. 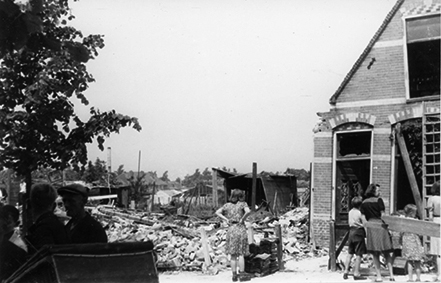 Damage to the houses on Drieboomlaan.

The crew members are not so lucky. On the Pelmolenpad a crew member falls through a kitchen roof, of course he does not survive. In the nearby village of Bobeldijk, an airplane tailpiece with a paratrooper attached to it crashes at De Nobelshoeve farm. He still tries to kick himself in the air, his cords are tangled. He won’t survive either. In total, thirteen of the twenty crew members perished. The Germans capture six of the survivors, only Sergeant Arthur F. Brown manages to escape.

Brown probably landed with his parachute in Berkhout. After a few days of wandering, he is found in the village of Hem by Alie Commandeur, in the land behind their farm. Her father Tamis Commandeur happens to be in the resistance and has good contacts with the Enkhuizen Knokploeg. That’s how Brown manages to escape. He poses as a deaf-mute watchmaker and miraculously returns to England safely. The first thing he does? He gets back into a bomber heading for Germany. 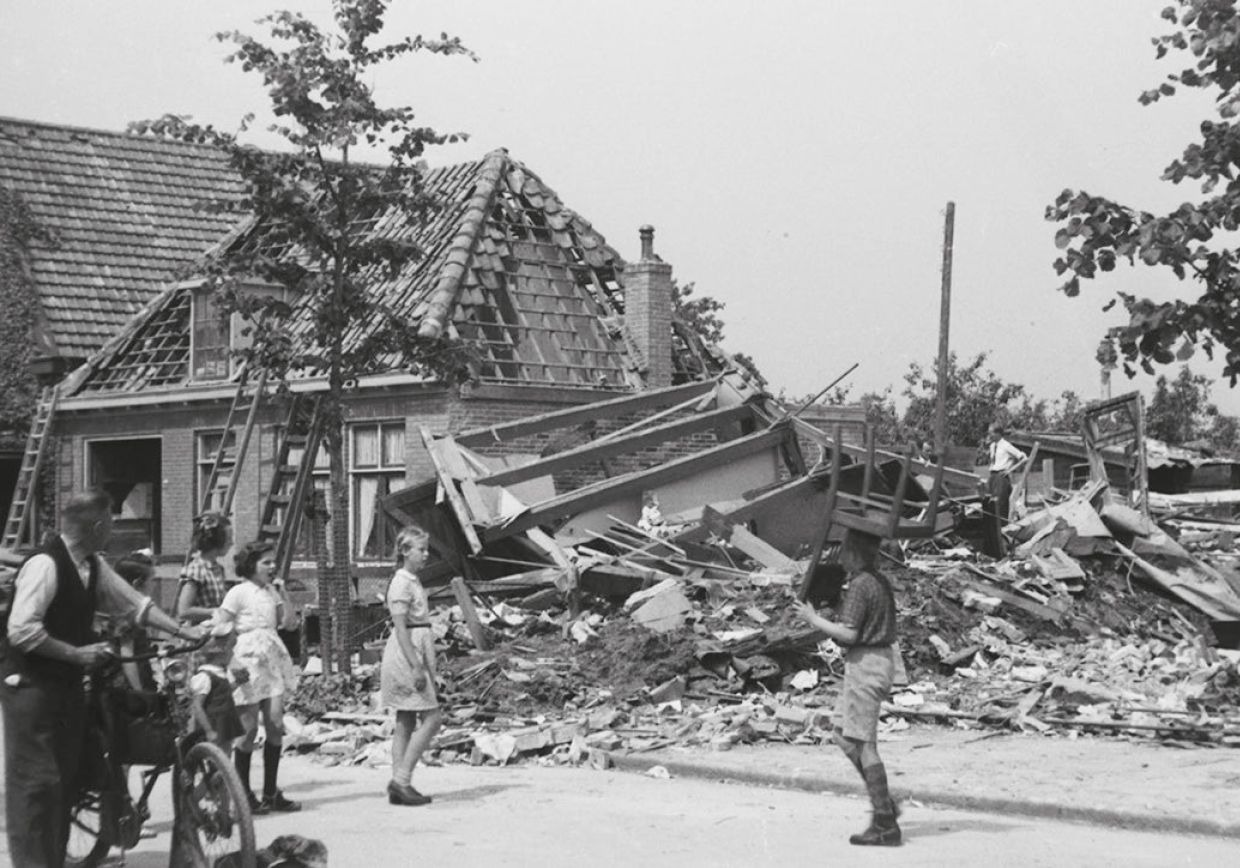 Damage to the houses on Drieboomlaan.